During the pre-camp, KASUMI Corporation (University of Tsukuba Store) provided ingredients and the members of the lab prepared meals for the Swiss team.

Even though the irregular things happened such as a training schedule change, the lab provided freshly-cooked meals every day and the Swiss team admired the meals at the university.

University of Tsukuba cooperates beyond the boundaries of affiliations and field to support athletes and contributes to society.

We introduce the part of the report about “Lunch supply project” of the Swiss team pre-camp in 2019.

※This page is based on the bulletin of Faculty of Health and Sport Sciences, University of Tsukuba 43 31-37, 2020 and translated by OPOP, with the consent of the lab.

Overseas athletes have been working on preparations by the experiences the hot and humid climate in Japan to achieve their best performance at the Tokyo 2020 Olympic and Paralympic Games.

Meal is a one of important elements in conditioning.

Especially during overseas trip and unfamiliar environment, it may be difficult to adapt to the unique ingredients and tastes of each country and to take in appropriate nutrients.

Extra care must be taken when having meals outside of own home country.

In 2019, one year before the Tokyo 2020 Olympic Games (※The postponement to 2021 was announced in March 2020), Swiss team held their pre-camp at the University of Tsukuba.

The Research Lab of Sport Nutrition provided the meal support during the pre-camp.

The pre-camp was held in spring for the IAAF World Relays YOKOHAMA 2019 (11th to 12th May) and in summer for the Tokyo 2019 ITU World Triathlon Olympic Qualification Event.

This meal support was provided in spring and summer.

The lab received a request that the team can have a meal immediately after training at the university.

The members of the Research Lab of Sport Nutrition, University of Tsukuba were in charge of preparation including menu plan, ordering ingredients, and cooking.

Because the staff was different every day and this was a day-to-day project, they had meetings so that they could provide various menu, uniform flavor and well balanced nutrition throughout the pre-camp.

One of the features of this meal project is that KASUMI Corporation (University of Tsukuba Store) cooperated with our university and help with providing ingredients.

In cooperation with KASUMI, it was possible to get ingredients on the morning of the meal and to provide fresh and safe meals to Swiss team because the kitchen and the store are 5min walk away.

One of the important things about meal support for foreign athletes is planning menu.

The followings are points which the lab cared when preparing menus for this meal support.

The menus were consisted of staple food, main dish, two side dishes, soup and fruit.

In nutritional guidance for Japanese athletes, the lab usually uses estimates based on their knowledge as a reference and makes a guideline for the amount of energy to be provided for each project, considering the characteristics of the competition and the timing.

However, the physique and physical characteristics of Swiss are different from Japanese, and the reported average height is much higher than the Japanese.

In addition, there are differences in the training menu and in the taking nutritional status such as whether athletes take supplements.

Therefore, individual meal intake that should be taken from the lab’s meals is different.

The menus for this project were prepared with an energy amount of about 1000 kcal as a standard. And the lab provided menus which the athletes could adjust the whole intake by the amount of staple food.

The lab used green and yellow vegetables in their menus proactively so that the athletes could take enough vitamins and minerals which tend to be lacked in meals.

And they used the protein ingredients in soup and side dish in addition to the main dish so that the athletes could take protein from multiple ingredients.

They drew pictures of the menu and wrote the ingredients so that the athletes who have different food cultures could understand the dishes and they could know ingredients just in case they did not tell us about allergy.

②Easy to eat even after training

For example, they cared ingredients and seasonings not to overlap in one meal, and prepared both cold and hot dishes so that the athletes could enjoy.

Especially during the summer pre-camp, cold dishes were included in the menu since the athletes ate after training in hot weather.

About the temperature of dishes, they decided the cooking process with consideration of the serve time so that they could serve hot dishes and cold dishes properly.

Also, training in an unfamiliar environment may cause more physical and mental strain compared to regular place.

For this reason, they considered the menus that focused on not Japanese dishes but Western dishes which were familiar to Swiss athletes.

When you focus on Western dishes, it would be a lot of fat. They tried to reduce fat as much as possible by ingredients selection and cooking process.

For example, when using minced meat, they used not only beef and pork but also chicken with low fat depending on the menu. Also they removed excess fat during cooking.

In addition, they prepared the menu that provided two kinds of raw fruits on some days so that the athletes could take in additional vitamins which are lost by heat cooking. 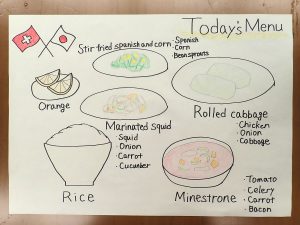 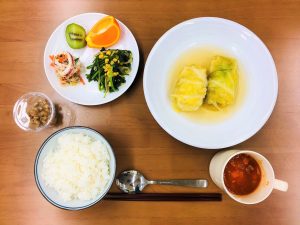 The example of the menu during the spring pre-camp: Rolled Cabbage using minced chicken

In this project, KASUMI Corporation cooperated with our university by providing ingredients free of charge.

The followings are the summary of the cooperation.

・receive the ingredients in the morning of the serving day

(in the case of regular holiday, pick up the day before)

In the summer pre-camp, because the university was notified that the athlete had an allergy to wheat and milk after arriving in Japan, the lab needed to take prompt action.

In that case, KASUMI offered gluten-free pasta specially, and the lab could prepare for that athlete the same menu as possible with other athletes.

Here is the evaluation of meals based on the leftovers and the feedbacks from the athletes.

One of good points was the drawing menu, which got attention from the athletes.

Even when serving Japanese food that is not familiar to Swiss that much, they could check what kind of ingredients were used.

The highly rated menus were tomato-based dish, spicy one, pasta, and udon.

Pasta and tomato seemed familiar to Swiss, and the lab got many positive feedbacks.

Also, since KASUMI (University of Tsukuba Store) cooperated with the university in this project, the lab could offer a lot of fresh fruits.

The athletes were very happy with this and wanted to know where to buy.

On the other hand, some ingredients were not popular.

Leafy vegetables that tend to soften after cooking, such as spinach and komatsuna in a soup, tended to be leftover. In this case, they did not eat them but only soup.

In addition, Japanese unique ingredient such as mizuna were unpopular maybe because of its bitterness.

In this project, the cooperation with not only members of the lab in charge of making menus and cooking but also OPOP, students who supported the Swiss team during the pre-camp, KASUMI, and the others made the project possible.

The members of the lab realized again that it was important not only to prepare meals but also to work with others since many people were involved in supporting athletes.

We must have allergy information, number of people, gender, physique, characteristics of their competitions, etc. in meal support. But sometimes it is difficult to communicate smoothly with overseas teams due to time differences and languages.

The flexible actions and cooperation of many staff involved has made it possible to complete this project.

Cooperation among staff is essential for meal management for the athletes’ best performances.

This project was provided for the Swiss teams’ pre-camp for the Tokyo 2020 Olympic Games.

There are many reports of meal support for Japanese athletes overseas. However, supporting overseas athletes in Japan specially occurs before the Games.

Meal support for overseas athletes has sometimes more unexpected things than domestic support due to sudden schedule changes or accidents.

Working together among multiple staff is the most important point. Successful support can be come true when this cooperation goes well.