Please note that achievements of research and development shown below are small parts of activities organised by Sports Research & Development Core, and there are many projects withholding from publication in order to maintain the advantage of Japanese players at the international competitions.

University of Tsukuba is get involved in “High Performance Support Project” lead by Sport Agency, and developed shoelace made of soft and strong fibre, which is called “super fibre”, as a research and development project for PyeongChang Olympic game. At PyoengChang 2018 Olympic game, Mr. Keiji TANAKA used our shoelace and went to the competition.
Shoelace for figure skating shoes is generally made of cotton but the shoelace we developed is made by combination of special fibres, and its strength is about 10 times normal. When it comes to jump, the shoelace is easy to cut with touching a blade of skate shoes, but if it is cut during the performance…it is a big deal! The shoelace developed by our university is popular among athletes actually using it, because it is hard to cut and players can jump with confidence. 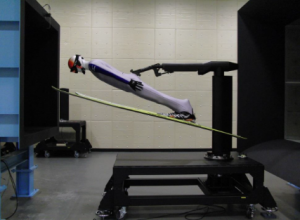 As “High Performance Support Project” lead by Sport Agency, University of Tsukuba is get involved in the project to research and develop cutting-edge jumpsuit for skiing, corroborating with Japan Sports Council and Mizuno Corporation. At PyeongChang 2018 Olympic Game, an athlete of Japanese national team wore a jumpsuit that utilized the research results of our university, and went to the competition.
In the jumping competition, it is said that the performance of the suit affects the result. In order to support athletes to fight in their best conditions, we contributed to the development of jumpsuits with considering the fundamental skill of jumping and performing an enormous number of wind tunnel experiments and CFD analysis with the jumpsuit shape is fine-tuned.