Actually, the IOC (International Olympic Committee) decided to hold the 1940 Olympic Games in Tokyo, before the World War II. (In fact the Games were canceled because of the war.) The Olympic Games were successfully invited to Tokyo three times.

There were some people who related to the Bunkyo City and worked hard to invite the Olympics to Tokyo. *Tokyo campus for the University of Tsukuba is located in Bunkyo City.

He advocated Tokyo as the place for the Olympic venue in 1940, and Tokyo City Municipal Government decided to hold the Olympic Games in October 1931. In November of the same year, Mayor Nagata requested the cooperation of the Great Japan Amateur Sports Association (Dai Nippon Taiiku Kyokai; Chairman Seiichi KISHI, vice chairman Ryozo HIRANUMA) to invite Olympic Games to Tokyo. 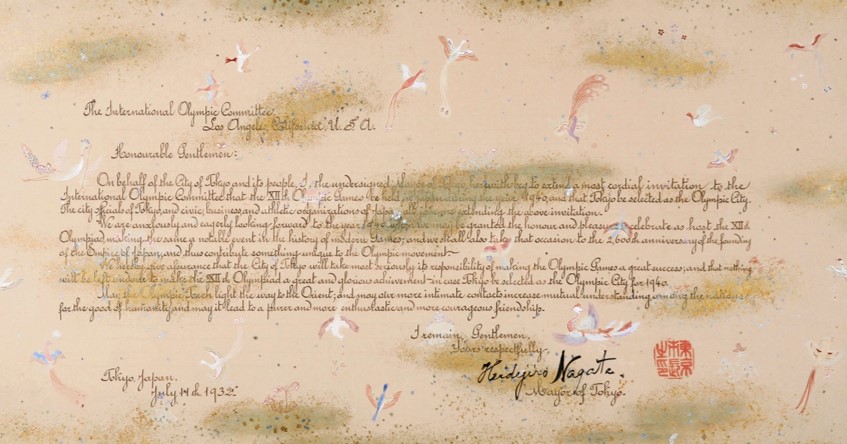 Olympic Movement in Japan has started when Jigoro Kano was appointed to the member of the IOC in 1909. Kano decided to participate in the Olympic Games, with aiming at spreading national physical education (in other words “lifelong sports”) and founded the Great Japan Amateur Sports Association (Dai Nippon Taiiku Kyokai).

KANO, as the founder of the Kodokan Judoh, has claimed that by incorporating the idea of “Seiryoku-Zenyo (maximum efficient use of energy)” and “Jita-Kyoei (mutual prosperity for self and others)” into the Olympic Games and by holding the Olympic Games in Tokyo, the Olympic Games will truly become a world culture. 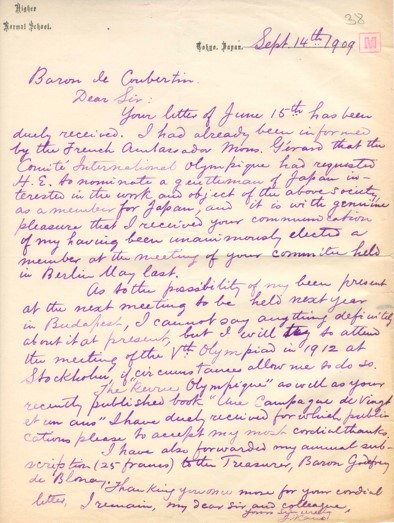 A letter sent from KANO to Coubertin (on September 14, 1909 / possessed by IOC) He wrote about appreciation for appointment as the member of IOC, and participation in the Stockholm contest in 1912. 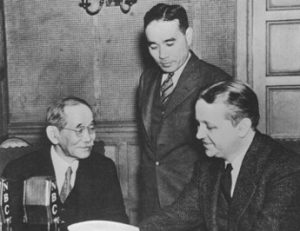 Kano heading to Berlin with the member of the IOC (1936) 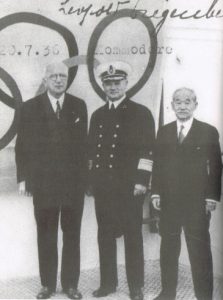 Following the KANO’s words that ” If we make them an explanation, they might give way to us.” SUGIMURA negotiated with Mussorini personally (in February 1934). Mussolini promised to withdraw Rome from the candidate city for the Olympic Games for the Japanese citizens based on the impressive speech made by Sugimura.
At the IOC general meeting held in Oslo in February 1934, SUGIMURA claimed that “The Olympic Games have been held eight times in Europe and twice in the US, however, no games have been held in Asia. Considering the global nature of the Olympic Games, we must hold games in the East.” The IOC criticized SUGIMURA’s behavior that he directly spoke to Mussolini, but SUGIMURA argued that he went to see him as diplomat.
Sugimura resigns from the IOC at the IOC General Assembly in Berlin (July 1936). However, at the vote held immediately after his resign, 36-27 votes broke Helsinki, and it is decided that the Olympic Games will be held in Tokyo in 1940. It seems that SUGIMURA resign from the IOC committee to ensure the flow to Tokyo. 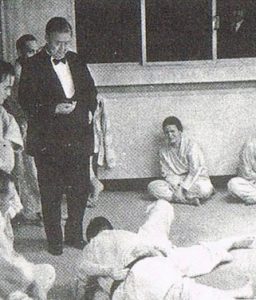 In April 1938, HIRASAWA boarded on Hikawa-Maru (the ship) from Vancouver, and on that ship he saw the last of Kano (KANO was also boarded on Hikawa-Maru).
He wrote as a memorial note that “I shared the last eleven days of KANO’s brilliant eighty years’ life, I sincerely pray for the success of the Tokyo Olympic Games”.

When HIRASAWA made a speech to invite Olympic Games to Tokyo at the IOC General Assembly in 1959, he read the passage about the Olympic games, written in the Japanese textbook and appeal to the participants. As a conclusion, he claimed that “The Olympic Games are taught in every classroom in Japan, therefore all the Japanese people understand the Olympic spirit”. His speech played a decisive role, and Tokyo was decided as a venue for Olympic Games in 1964. He responded to the thought of KANO which emphasized the power of education.

HIRASAWA read a story “Sports Flag of the Olympics” written in textbook for 6th graders of elementary school students. 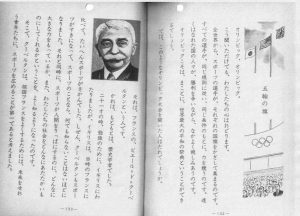 Learning about the Olympic Games has emphasized and Olympic education has been deployed from the early days in Japan, which also became the driving force of the Games’ invitation.

From “one school one country movement” to “world friends project”

In the Olympic and Paralympic Winter Games held in Nagano in 1998, an educational programme was developed in Japan that one school choose one country as its partner country and let students cheer them, and make opportunity to interact. For example;

Invite National Team of Bosnia-Herzegovina to school and students interact with athletes. (Nagoya, 1998) 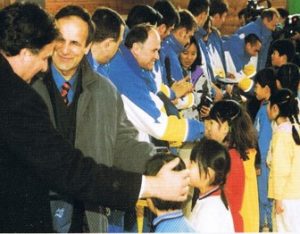 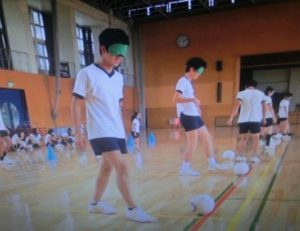 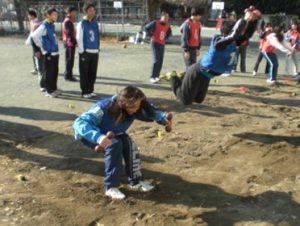