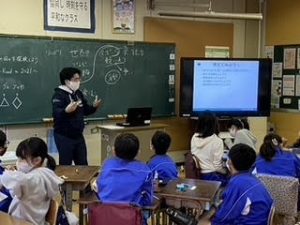 On October 20th, Assistant Professor AKIYAMA Hajime (Faculty of Humanities and Social Sciences, University of Tsukuba) gave a class on the theme of “Olympic and Peace” at Ninomiya Elementary School in the City of Tsukuba.

The University of Tsukuba has built a close relationship with the local community by exchanging and utilizing research resources and achievements with the City of Tsukuba, and planning and implementing joint projects as social contributions and regional cooperation.

This class was held as part of the “Tsukuba Science Delivery Lecture” aimed at utilizing local resources.

The class was mainly held a discussion-style and encouraged students to think about Olympics and peace.

First, students formed a group of 3 to 5 people and discussed about the purpose of the Olympics, the reason why it started, etc.

After a group discussion for about 3 minutes, they had a class-wide discussion.

They shared ideas such as the Olympics is the interaction with other countries and the world, and the purpose of the Olympic is to improve one’s self. In addition to these opinions, some students linked the Olympics with the politics and economy of the country.

After that, Dr. AKIYAMA gave a lecture on the Olympic Games and peace, highlighting the Games that were canceled or postponed in the past, and emphasized that they can only be held in peace.

He also mentioned refugees who could not participate in the Games on behalf of their country for a long time, and explained the establishment of the Refugee Olympic Team at the Rio 2016 Olympic Games.

In the end, he stated the meaning of the Olympic Games, such as the international friendships and understanding each other.

Based on these, students talked in a group “what is peace” and “what can we do by myself and how can we cooperate with others”.

The students learned and discussed the peace which is essential to this era of rapid globalization.

By listening to the others’ opinions, they broadened their perspectives to think about the Olympics and peace.

They will continue studying and having discussions on the topic after this class.

We look forward to their further learning.

(written by NAKANO Keita, 4th year in College of Japanese Language and Culture, School of Humanities and Culture, University of Tsukuba) 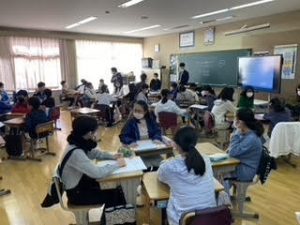