Initiatives in Anti-Doping at University of Tsukuba

The University of Tsukuba conducts research about system, policy, and culture as relate to anti-doping.

We introduce the part of the research and development projects that improve methods for the analysis and measurement of doping.

At our university, the research group of Associate Professor WATANABE Koichi (physical education) and Professor TAKEKOSHI Kazuhiro has been promoting the development of testing methods for gene doping and the research that integrates robot technology with gene doping test.

For more details about the Laboratory of Laboratory/Sports medicine, Division of Clinical Medicine, Faculty of Medicine, University of Tsukuba that promotes this research, please see their Website and Facebook.

What is gene doping?

Gene doping is the act of an athlete trying to intentionally regulate genes in their endocrine organs to improve their performance at games.

With the rapid progress of gene therapy, people have been regulating genes in the human body for medical treatment around the world.

On the other hand, there is a possibility that the technology could be used as a doping to improve the physical performance of athletes.

In fact, the World Anti-Doping Agency (WADA) has been alerted against the gene doping and added it to the prohibited list as well as drug doping.

However, standard test method for gene doping has not been developed yet.

Also, unlike drug doping, it is difficult to detect evidence because an evidence of gene doping does not remain in the body.

Therefore, the development of methods for detecting gene doping is urgent worldwide.

The research group of Associate Professor Watabe and Professor Takekoshi started their research to develop methods for detecting gene doping.

Then they attempted to detect the evidence that the model mice had gene doping by using the PCR (Polymerase Chain Reaction) method and various samples such as blood and stool.

As a result, in the experiments using adenovirus vectors, they found a large amount of the DNA fragment of this virus vector in a single drop of blood (Sugasawa, Aoki et al. 2019; Figure 1).

In the experiments using plasmid vectors, they also succeeded in detecting evidence of gene transfer in a single drop of blood (Aoki, Sugasawa et al. 2020).

If this method can be applied to humans, it would be possible to detect gene doping.

The research group has been developing test methods using various other vectors.

They are working hard to establish a technology to increase the detection sensitivity. 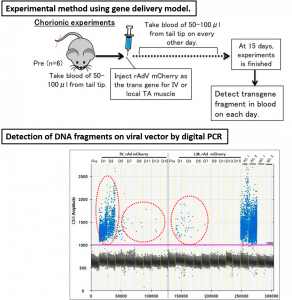 Top：Overview of animal experiments carried out in this study.

The blue part in the red frame indicates there is the DNA fragment of the virus vector in the blood sample. This means that evidence of intentionally transgene was detected.

These research results suggest that a single drop of blood could be a sample to detect evidence of gene doping.

These achievements have been published in the following international journals.

It is highly likely that PCR methods will be widely used in future gene doping tests.

However, this method is likely to cause human-caused contamination. Therefore, high technology is required to maintain test accuracy.

If the contamination happens, the reliability of test results is lost.

In order to solve this problem, it is needed to test using an automated system in a clean environment without human intervention.

Then robot technology is expected to play a major role in the future.

If robots can test in clean environment with same reproducibility as humans, the test accuracy of gene doping will be dramatically improved.

Also, robots can operate 24/7 and test a lot of samples, and reduce the stress of the people in charge of the test.

Then our research group has been conducting research and development to apply their knowledge and technology to gene doping test.

They are making their efforts to equip the experimental robot called Maholo, which was developed by the Robotic Biology Institute Ins., with functions for gene doping test (Figure 2). 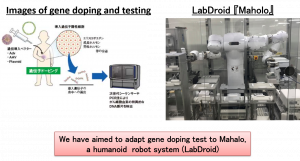 The development of test methods for detecting gene doping is going well. It is expected that their research results will be applied to Maholo in the future.

You can see Maholo on this page.