Tsuku-lympic is an event to move the body and enjoy sports regardless of the disabilities. Students learn about adapted sports interact with local people through sports in this event. Tuku-lympic, which began in 2004, was held on 9th December 2018, at central gymnasium of University of Tsukuba. 29 graduate students were in charge of planning and management of this event with supports of 65 undergraduates. This year, the theme was set as “It’s the Last Year of Heisei (Japanese era), let’s Gather!” and about 250 people were gathered. “Iba-lucky”, a character for the national sports festival hosted by Ibaraki prefecture, appeared at the gymnasium and livened up the event. 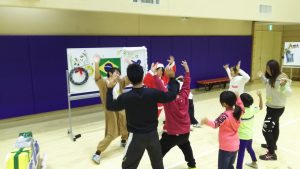 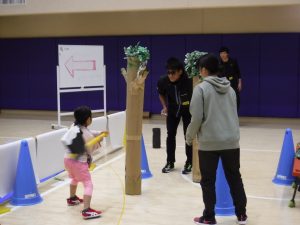 At the gymnasium, three booths were prepared by students; “Let’s Help Santa with Dance Power”, “Let’s Make a Robot-Suit!”, and “Let’s Go to Meet Shige-Panda!”. Students organised those booths including the movements that they wanted children to do. As usual, corners of Boccia, Stackout, Ball Pool, and “Get Christmas Decorations from the Tree” were set up. Everyone enjoyed moving their bodies with the viewpoint of “Adapted Sports” that flexibly changes the task and supporting method according to the type and degree of the disability. At the last part of the event, students major in health and physical education at University of Tsukuba demonstrated the sports performance and it livened up the event.